My trip to Tofino… there’s not a lot to say about it, it was just wonderful!

I got over to Vancouver Island with the BC ferry from Horseshoe Bay. That’s where I started to realize what a huge island Vancouver Island actually is. If a ferry carries trucks and buses, two floors of cars, you can go jogging on the top deck, it got seven floors, an elevator takes you up there, pissoirs look like some five star hotel juvels, … If a ferry is that big, the island where it’s going to must be even bigger, I though.

I ended up on highway 19A hitchhiking over to Tofino. First I was holding a «Tofino» sign and after a while I gave up on that and just wrote «Parksville» on it. Parksville’s just around the corner I though and definitely somebody is going to pick me up. But there were still those other two hitchhikers in front of me not getting on a car either. Finally I made it over to Tofino. It took me a while but it was worth it, I met some pretty interesting people on that trip. I had four lifts to get over there. The first guy just drove me to the next shopping mall, the second lady drove me up to Parksville and it blew me almost off her jeep – I was glad to get off again. Then, a construction worker drove me all the way over to Port Alberni. There I was lucky. That 24-year-old guy headed right to Tofino. He was like «Hey man, grab that mojito behind your seat! Kill it!». He drunk driving and told me he was already driving for over 12 hours and stopped at every pub on the way. Suddenly he pulled over, grabbed the CD sleeve and poured some coke on it. After that line of coke he was again ready to drive and put some gangsta rap music on. I was not afraid; he drove that car pretty good, I was just a bit worried about that kid. 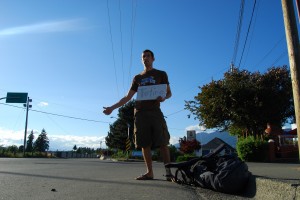 I made it to Tofino before the sunset and got right to Tonquin Park beach when the sky was glaring in a wonderful red. I was just going to settle down on Tonquin beach when Cut passed by and told me «Hey, better get over there to the next beach, they won’t check that one.» I ended up climbing through the rain forest to get down to the second beach. Down there was just like a huge hippie community – everybody sitting around the campfire, singing and Cut playing his guitar like a rock star. Later on in the night I took my stuff and found some nice quiet spot further down on the beach. Hell, was I sleeping well!

The next two nights I spent in the HI-Hostel, the Whalers on the Point guesthouse. Lucky as I am the hostel was full and they put me into the games room, sleeping right next to the pool table. The next day I checked out Long Beach. Again I was hitching down there. Just about the 5th car picked me up and guess who was in there – Cut again, he went fishing with his friend. Long Beach is a wonderful beach, a really long beach, guess you couldn’t give it a different name.

While hitching back to Tofino those nice girls picked me up and I showed them the way to Tonquin Park beach:

Wednesday I was on a whale-watching trip up to the Hot Springs. We saw Orcas (killer whales), otters and grey whales… 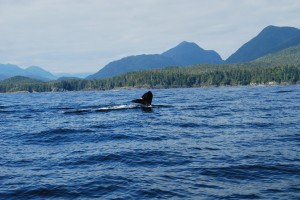 The Hot Springs were like really hot (over 50°C). This was really relaxing – especially the small pool where the warm water from the spring gets mixed by ocean water. I could have stayed there forever but we had to get back on the boat. That was a fun trip where I met you guys, Raphi & Renate.

My last night I preferred to sleep again on the beach. I went down to Cox Bay beach. It’s not as long as Long Beach, but also pretty huge. I was hanging on the beach the whole afternoon and then just stared for about 3 hours into the sun – This sunset was amazing! It was like the most wonderful sunset I have ever seen! 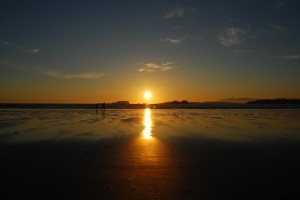 The beach was all mine. Most of the people already left it before that wonderful sunset. I settled down on a quiet spot and fell asleep while watching shooting stars that just didn’t want to stop.

Friday morning the Tofinobus just didn’t want to pick me up on Cox Bay, so I asked for a refund and ended up again hitchhiking. Lucky me! Adrian Dorst, a great photographer drove me down to Ucluelet. From there two crazy chicks drove me all the way over to Nanaimo. It was fun riding with them! Another two lifts from Nanaimo and I was back in Whistler, home sweet home.

Back in Whistler means back in the park, back on the steep trails, back...

Long time no post on this blog... I'm still in Whistler. A lot happened, I met...