Whistler’s bike park is just sick! There are still trails I haven’t seen so far, the whole Whistler mountain is just full of trails, like a big labyrinth. You find everything, the steepiest most technical downhill tracks and the highest jumps I’ve ever seen, flowy burms and crazy ladder bridges (the thing we call «North Shores» back in Europe but nobody calls them like this over here).

I gotta get back to the park now. It’s Jake’s last day in Whistler, the crazy guy from Maui (Hawaii). We gotta rip down those tracks together. It’s so much fun riding with him. He’s riding his bike like a pro but he still doesn’t speed up too fast risking his life like a lot of guys do in the park. Yesterday his friend did that huge double with the huge gap down in the X cross park, the biggest double in the whole park. I was almost following him, but glad I didn’t… He just lost his bike in the middle of the air and bumped right into the landing wall. Damn, that was bad! He broke his clavicle (collar bone) on his last days in Whistler.

So, that’s us, the remaining ones: 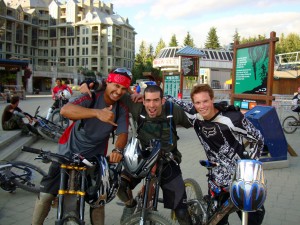 Look at that kid to our right, he’s from Geneva, Switzerland. He’s riding his bike like nuts and does all kind of tricks in the air. It’s really fun riding with him. When we took him all on the top and rode all the way down he just had such a huge smile. Look at his teeth!

Last Sunday I was riding together with Petr on Whistler’s west-side mountain. There are just so many trails there, all real biking trails, hiking strictly forbidded! In Switzerland it’s just the other way round. We did some steep uphill and I was sweatening quite a bit with my heavy downhill bike. Petr showed me a steep downhill, a wonderful track. It ended up in the valley trail which is full of ladder bridges. 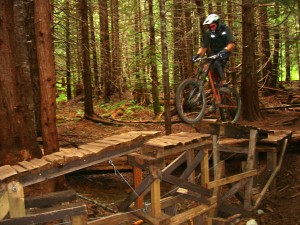 And after every ride… back in the Village at Miro’s coffee shop, Esquire’s: 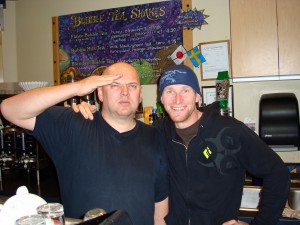 Hey, besides, we got the apartment! $900 for 5 weeks, right in Upper Village, isn’t that great? I’m going to share the 2bdrm apartment with Anne, the German girl from the hostel. But first, I’m heading off to Vancouver for the next 3 days. And now I definitely gotta get back to the park to join Jake for some last great rides. See you soon!

Here I am, I finally made it to Whistler! Currently I am staying at the...

Last Wednesday I hurt myself up on Freight Train. I fell right off the trail...