Warning: This article was written by a Windows/Linux User who just started to switch to OS X after a period of 10 macless years.

Two days ago I got my new Mac Mini and finally I’m serious about switching from Windows Vista to Mac OS X Leopard. It’s just too annoying to wait 4 years for a new Windows system which is worse than it’s predecessor and which might start to get useful as of SP1 which still is not out (my standby still does not work and I gave up on installing «SP1 beta pre-RC1» – what the hell?!!). Vista is more like a blown-up XP that does everything worse than XP. I like its user interface but not if I need to sacrifice 50% of my CPU-power on a powerful IBM T60p.

My first impression of OS X Leopard: WOW!
My second impression: If you go with all the defaults, it works like a charm. If you want to get a bit further, OS X is no way easier to fine tune as a Windows OS but still much easier as tuning a Linux.
My conclusion: Cool, Leopard rocks! But hey, be realistic, each OS got his pros and cons.

Here are my Tips & Tricks of the last two days…

This actually means «Upgrade DVD». Currently Apple still delivers its hardware with OS X 10.4 «Tiger» preinstalled. Upgrade DVDs for 10.5 «Leopard» are included in the package, but remember, those are Upgrade-DVDs only! This is pretty annoying.

As I was not aware of this, I repartitioned my whole harddisk before starting with the Leopard install. No luck, the Upgrade-DVD asks for an existing Tiger-install.
So, if you wish to split your harddisk into multiple partitions as well, either do this with the disk utility at install time by creating an image of your existing Tiger installation and recovering it back to the new partition, or just keep the current partition and fire up the disk utility after completing the Tiger installation. You will be able to repartition your unused space.

This can be simply done by replacing the following image:

Here’s my favorite Vista wallpaper I am using now on my Leopard background: img30.jpg (1920 x 1200)
If you like Vista’s wallpapers as well, grab them from C:WindowsWebWallpaper

Move User to a different partition

As we have hopefully set up a separate partition for our private data, here’s the bash-way of moving a home. (based on this article)
First of all copy the whole home to your new partition:

Reboot, verify if your user data is at the new spot and then delete it from the old spot (/Users/username).

TimeMachine backups way too often. We want to higher the default backup time interval of 1 hour. (based on this article)

Subclipse does not work due to missing JavaHL bindings

Leopard includes Subversion 1.4.4, nice! But as it comes without any JavaHL bindings, we won’t be able to use it for Subclipse.
Workaround: Install the Subversion binaries from
http://downloads.open.collab.net/binaries.html

locate does not work

We might as well use the Spotlight database for locate. Put the following into your ~/.bash_login:

(based on this article)

Adobe CS3 (tested with Adobe CS3 Web Premium) does not support install on a case-sensitive HFS+ «Extended (Gross und Kleinschreibung und Journaled)» partition.
Workaround: Switch back to «Extended(Journaled)» with Leopard Install-DVD (or Drop-in DVD), backup whole partition to a separate drive or another partition as an image, re-format your system partition and recover the image.
Currently there is no way of running Adobe CS3 on a case-sensitive partition. Sad but true.

This keyboard/mouse combination works with OS X. We just need to setup its keyboard layout. No built-in keyboard layout in Leopard fits it. The following workaround is based on this article.

Download the Logitech Control Center for Macintosh OS X
As it is still buggy under Leopard and basically all Logitech drivers are pure crap, we are just going to extract the keyboard layouts and use them:

That’s it. Now you can open the International system preferences pane and go to the Input menu and see the fifteen-or-so Logitech keyboard layouts:

OS X is a Unix system so we need a root user, right?
By default, the root user is deactivated in Leopard. We can activate it by running the directory utility in /Applications/Utilities/Directory Utility.app (Programme >> Dienstprogramme >> Verzeichnisdienste).
Menu «Edit» >> «activate root user» (to see this menu item you might first click on the lock)
(based on this article)

So, what’s the difference between «sudo su -» (by entering the user’s own password) or «su -» (with an activated root-user and by entering his password)? The root user way seems to be more secure in my eyes, but even though I have activated the root user, sudo is still active.
To deactivate sudo for admin users (no longer required as we got now a «real» root user), edit /etc/sudoers:

Damn! We can still change the root-passwort over Directory Utility without knowing the root password! I just don’t get the Apple-way of security…

TimeMachine Backup on a Samba-share

Shortly before releasing Leopard, Apple has disabled this feature even though it was active already since the first developer releases. This was done due to some problems and incompatibilities. So be prepared, that this won’t work with your drive. We hope, Apple will re-enable this feature in 10.5.2 !
Mount your smb-share regularly in Finder with «Go to…» > «connect with server…» (e.g. smb://piposrv4/tmbackup$) and store the username and password in the keychain. TimeMachine auto mounts the drive when it needs to afterwards.
Enable this unsupported feature:

That’s it! The SMB-shares are now visible in the TM drive selection: 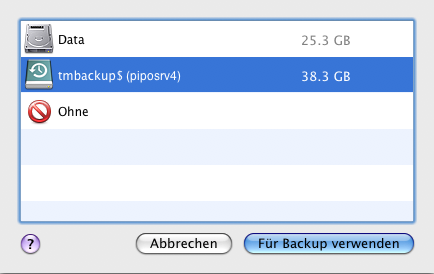 You might be looking for cronjobs in Leopard and don’t find any /etc/cron.d or similar. Leopard handles the whole thing differently:

(based on this article)
OS X stores metafiles on every single spot, it clutters the whole filesystem with trash. This was one of the main reasons it took me so long to switch from Windows to Mac.
If you store your files on a Samba-share, OS X creates those .DS_Store files which we definitely don’t need. We could prevent Leopard of doing this by the following command:

This may be a bit too radical. It’s smarter to just prevent the creation of those files on the Samba-side. Edit /etc/smb.conf and add the following to your share:

I have upgraded Debian from Sarge to Etch on various systems and did not run...

I strongly do NOT recommend to use Mac OS X Leopard in a productive...